By Eleonora
Posted April 26, 2020
In Our Blog
Budelli Island, Sardinia2020-04-262020-04-29https://www.emeraldcruises.it/wp-content/uploads/2019/12/logo-emerald-freedom-light.svgEmerald Cruises: Sardinia Private Boat Tour in Ribhttps://www.emeraldcruises.it/wp-content/uploads/2020/04/pink-beach-sardinia-sand-of-budelli-emerald-cruises.png200px200px
0
Please follow and like us:

Pink Beach in Sardinia, Why is it pink?

Due to the uncontaminated wild aspect and for its enchanting colors reminds to Caribbean beaches, but the pink beach represents a unique in Sardinia for different reasons, not only for the pink shades of its sand.

First of all, it is the symbol par excellence of La Maddalena Archipelago, of its nature and landscapes that look like painting.

Just observing pick beach, even from distance, you will fell unique emotions. It gives the feeling that God, in his immense art, has created a perfect and incredibly beautiful world.

On the pink beach the clear waters of La Maddalena Archipelago touch the shoreline with gentle waves; they seem to caress the sand, taking care to preserve it.

The same concern should have humans who, unfortunately, as history has shown, have violated the beach ecosystem by carrying out reprehensible actions such as the pink sand removal or the abandonment of waste.

Thanks to the safeguard rules introduced by the Park Authority of La Maddalena in 1988, the pink beach ecosystem is being reborn. Thanks to them, the pink nuances slowly come to light.

The peculiarity of Budelli pink beach is the color of the sand, characterized by incredible pink shades.

You could think of a suggestion, may be the rays of the sun that settle on pebbles and minerals, accentuating their reflections.

Well, not everyone knows that it is a protozoan to color Budelli’s beach pink, to give it unmistakable shades.

As reported by the Microbiology Italy portal, the cause of the coloring is to be found in marine biodiversity.

It is due to Miniacina Miniacea, a benthic foraminifer that has chosen oceanic posidonia as its habitat, an aquatic plant that forms underwater meadows in Sardinia and off the coast of other Italian shores.

Miniacina Miniacea is protected by a pink limestone shell, with walls composed of calcite crystals immersed in an organic matrix.

This shell is divided into chambers connected to each other, communicating thanks to small openings (foramina), and grows by placing new chambers on the original one.

During the procedure, a crack remains from which reticulopods of the protozoan sometimes emerge: essential elements with a function of nutrition and mobility.

When microorganisms end their life cycle, the pinkish shells form a sediment on the seabed.

Transported by the marine currents, they finally reach the beach, mix with the sand and give it the pink color.

Budelli pink beach: how to reach it

Too often, in the past, the pink beach splendor has been defaced.

Stripped of the precious sand by vandals regardless of biodiversity, unaware of how precious our beaches are.

For this reason, in order to avoid further looting, the Maddalena Park has fully protected the beach by closing it to swimming, passing and anchoring boats.

The safeguard measures for the pink beach emanate from the Archipelago of La Maddalena National Park Authority regulate the protected area.

For example, in the area is FORBIDDEN :

However, there are other attractions to visit with a boat tour to the islands of La Maddalena: Porto della Madonna for example, known (also) with the suggestive name of Budelli natural pools.

Budelli natural pools, as the popular appellation wants, represent a transparent body of water enclosed between the islands of Razzoli, Budelli and Santa Maria.

This portion of the sea is characterized by intense turquoise waters and shallow waters.

The beautiful beach of the knights (in italian spiaggia dei cavalieri) overlooks Porto della Madonna, which from Budelli looks at the islets Carpa, Paduleddi and Stramanari.

This spectacle of nature stands out for its unique transparencies, now called “natural pools”.

Unlike the pink beach, however, the pools of the Porto della Madonna can be reached by boat.

Given the high number of shallows and outcropping rocks, it is recommended for the less experienced to be guided by a professional skipper with a deep knowledge of the place.

Visit La Maddalena Archipelago with Emerald Cruises
Back to Our Blog

Copyright All Rights Reserved © 2020 Emerald Cruises.it - www.emeraldcruises.it
All photos on this website are copyrighted material and all rights are reserved. 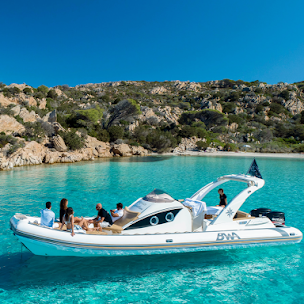 Limited time offer subject to availability usable throughout the 2021 season
Valid on all bookings that will arrive by 31 May 2021
Booking without any cash advance, you will pay on board the day of departure
Maximum flexibility on the cancellation policy given the period.
immediately € 200 discount on all early bookings, limited time offers.